Most of us decent people spend September 11 mourning and remembering the nearly three thousand lives lost nineteen years ago. Unfortunately, as the Internet constantly proves, there are a lot of indecent people out there. Take the latest awful Twitter trend #AllBuildingsMatter on the anniversary of 9/11. 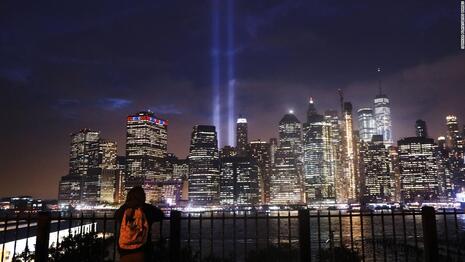 In the early morning of the 19th anniversary of the September 11 Islamic terrorist attacks, leftists on Twitter went to work being terrible as usual. This year, it was the trend #AllBuildingsMatter, a hashtag meant to openly mock the sentiment #AllLivesMatter. According to the Twittersphere, it’s supposed to tackle the hypocrisy of conservatives who tweet #AllLivesMatter in protest of #BlackLivesMatter. If one thinks saying #AllBuildingsMatter on 9/11 is insulting, then smug left-leaning logic follows that it’s just as insulting to type #AllLivesMatter any day of the week.

Of course, this ignores the fact that BLM never cared about any buildings in the first place. After months of violent riots and protests, the worst casualties were usually the buildings where minorities live and work. Any attempts to point out this fact are met with even more revolts. It’s safe to say that anyone who supports #BLM can’t even pretend to think that #AllBuildingsMatter.

This also ignores the skyscraper-sized differences between the two issues. BLM is willing to “defund” and dismantle the police when only nine unarmed black people were killed in 2019. Meanwhile, over 300 times that amount were killed by terrorists in one day on 9/11, and Twitter users are making jokes about it. If there’s anyone insensitive in this fight, it’s certainly not the person claiming #AllLivesMatter.

Sadly, it’s nothing new for liberals to degrade 9/11 for their own political purposes, especially if it involves Donald Trump. Nowadays, it even seems to be the media memo to use 9/11 to dunk on President Trump for COVID-19 deaths as seen by tweets below by White House correspondents from ABC News (Karen Travers) and CNN (John Harwood).

CONSIDER THIS: The United States has lost 64 times more people to Covid-19 so far this year than we did in the 9/11 attacks. How will Americans mourn those losses, and how will it change our politics?

The events of September 11 were tragedies of epic proportions. America’s courageous response to them proves why it’s indeed the greatest country in the world. And that’s definitely worth more than a dumb hashtag.