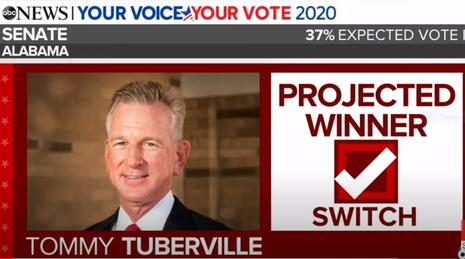 We can do without the South, Fels says. A lot of “dangerous jagoffs” have won elective offices in the North, even though they really want to be in the South. That was the nicest thing Fels said about the political Right.:

“Tommy Tuberville is a shit heel. He doesn’t know anything, other than he’s coached some college football — which pretty much makes you a psychopath, who isn’t capable of dealing with employees with agency, which essentially makes you a wannabe tyrant — and he hates people who don’t look like him.”

Tuberville (in above photo) said, “I do believe God sent us, and elected, Donald Trump,” and he is promised to cut taxes and legislate as a conservative. He attacked Sen. Jones for voting to convict the president during the impeachment trial. He also criticized Sen. Jones for marching in lockstep with radical leftists Nancy Pelosi and Sen. Chuck Schumer.

Tuberville’s election proves “why we’re completely fucked as a society and unsalvageable,” Fels rages. Celebrity trumps qualification, especially “in a place like Alabama that can’t spell ‘priorities.’ ” And that’s what we drag around.

On the other hand, the man who lost to Tuberville is Doug Jones, “a genuine patriot. He’s devoted his career to working for people who need help. Jones is more qualified by a factor of 12,” Fels says.

Sen. Jones’ virtues are overlooked, Fels says, because Alabamians only care about football tactics. Though Tuberville’s knowledge about them is “sketchy at best.”

This so-called shaky former coach compiled a gaudy 85-40 record at Auburn, where he went 13-0 and won the Southeastern Conference championship in 2004. He also whipped mighty Alabama in seven of 10 games.

Fels invites his detractors to yell at him because, unless they prove to him that Tuberville isn’t an evil, ignorant Republican, he’s not listening.

This is not just media bias, but pure, unapologetic hate.

USA Today also posted a weird comment about Tuberville, who said Tuesday night: “I want to thank President Donald Trump. He is without a doubt in my lifetime the guy that’s done more for the United States of America than any president that I’ve ever been around.”

Though Tuberville is conservative, Brent Schrotenboer of USA Today said he faces “a big question” about how he will govern if Trump is not reelected. This statement comes across as a subtle hint to Tuberville that, if Joe Biden is in the White House, the senator-elect should go along with the priorities of the far Left. Just more lunacy from the left-stream media.