Twitter does not hide its brazen efforts to protect the Bidens’ reputations from scandalous reports.

Even in a divided year like 2020, conservative and liberal commentators can agree that Big Tech censorship is a menace to civilization. After releasing a devastating report about the Bidens’ alleged nefarious dealings in Ukraine, the New York Post has been ruthlessly censored. British news personality Piers Morgan gave a bipartisan call to arms against Twitter’s censorship: “Whatever your political persuasion, this is an appalling attack on freedom of speech & freedom of the press.” Guardian writer Ross Barkan scorched his contemporaries for not being tougher on Big Tech tyranny as he asked: “Why is it so hard for liberal journalists to acknowledge this is a really bad and dangerous precedent?”

The story exploded onto the international scene earlier this month. In a shocking scandal released by the New York Post (the Post) on Oct. 14, purported emails from Democratic presidential candidate Joe Biden’s son Hunter reportedly exposed the corrupt dealings of both father and son in Ukraine. Twitter responded by disabling the link to the story, claiming: “Warning: this link may be unsafe,” and even prevented users from messaging the report to each other privately. Twitter even locked the Post out of its account. 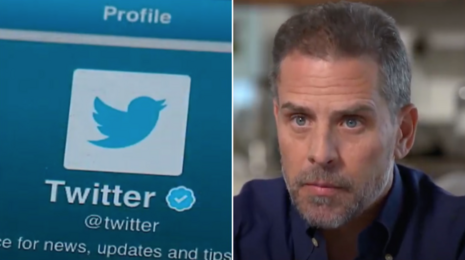 Twitter followed up by censoring White House Press Secretary Kayleigh McEnany, the Trump Campaign, the House Judiciary GOP (a part of the United States government), and others for sharing the story.

Even parts of the liberal establishment were bewildered by Big Tech’s draconian censorship.

Morgan slammed Twitter for covering up the Biden scandal story: “The New York Post’s Twitter account has been locked for a week because it has published allegations about the Bidens that haven’t been denied. Whatever your political persuasion, this is an appalling attack on freedom of speech & freedom of the press.” He then asked, “What is going on @jack ?”

Barkan lamented in a Twitter thread: “It’s October 26th and Twitter is still locking the New York Post’s account. Almost all the coverage of this unprecedented move has come from the right.” He then went on to ask: “Why is it so hard for liberal journalists to acknowledge this is a really bad and dangerous precedent?”

Barkan scorched Twitter’s leadership for its “profound overreach” and called out his fellow liberals for the “dangerous” belief that Big Tech should be given “more power to crack down on news organizations.”

“Twitter is desperate to protect Hunter Biden. They just locked me out for showing a video screen grab  of Hunter Biden allegedly smoking crack and getting a foot job from a hooker. I was willing to delete it, only because I know they’re not gonna stop the tsunami that’s coming.”

“Senate Commerce Comm this Wed (10 AM) will put Twitter CEO under oath to explain why he killed New York Post’s legitimate hard news story on Joe Biden’s involvement in cash-for-influence schemes.Hearing could force story into open before election.”

“Day 9 of Twitter ban on New York Post; paper’s last tweets were October 14. How long will ban last? If Twitter lifts it on, say, November 4, will look kind of obvious…”