Pity the queers (their term, not mine). Having just emerged blinking and malnourished from Mike Pence’s concentration camps, they find themselves staring into the maw of a new nightmare: a supreme court possibly disinclined to treat the constitution like a goody bag. 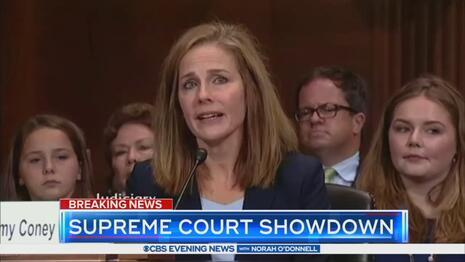 But as long as they have media allies who are willing to offer up free PR space in their “news” organs, there is hope.

For example, an Oct. 1 USA Today article written by Kate Sosin of The 19th, “a nonprofit, nonpartisan [stop laughing!] newsroom reporting on gender, politics and policy,” claimed Amy Coney Barrett’s SCOTUS confirmation could bring “drastic changes for LGBTQ+ Americans.” The newspaper said the story (appearing in “Politics” not “Opinion”) was “published in partnership with The 19th.”

Yes, a personnel change at the highest court in the land made Charles “start to think about that need to protect myself and my family,” he said.

Sosin explained that “Charles is transgender, and his husband is a Black man. The couple is very visibly queer, he says.” (Can he say that? Can I type it?) “Charles has concluded he might need guns. He’s learning how to use them.”

Or if you gotta make bigots bake cakes at gunpoint. Sosin quotes Alphonso David of the Human Rights Campaign worrying about the “risk that the court could allow individuals on the guise of religious liberty to discriminate against gay couples, as they exercise their fundamental rights in marriage.”

You see, Amy Coney Barrett, Trump’s pick to replace Ginsburg, is a practicing Catholic and staunch originalist juror that Sosin pointed out is associated with the “Alliance Defending Freedom, an anti-LGBTQ+ legal organization that the Southern Poverty Law Center has designated as a hate group.”

Of course, the SPLC is itself a hate group that’s gotten very wealthy by smearing conservative organizations as “hate groups” and using direct mail campaigns to scare septuagenarian hippies into sending them cash to fight the hate. It’s a racket, and a dangerous one.

While Barrett’s death-dealing laser opinions and nuclear jurisprudence are scary, the truth is, the gay left is terrified of any 6-3 conservative court. Per Sosin:

Across the nation, queer people are debating fast-tracking major life changes, expecting that rights they now have could be stripped away. Trans and nonbinary people report trying to quickly access gender-confirming medical care out of fear that the Affordable Care Act will be struck down, and their insurance companies will stop covering transgender surgeries and hormones. There is a rush to put through legal name changes.

There you have it: we risk returning to a world with back-alley sex-change operations, where George is forced to become Zephyr and Julia to become Julio before they’re ready, where cakes don’t get baked and where nice transgender people are driven to gun ownership. At least according to Project 19.

We look forward to hearing on these issues from another perspective. Can’t wait for USA Today to publish an article in cooperation with Alliance Defending Freedom.