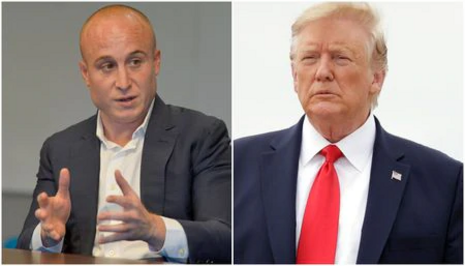 Quick! If you have heard of Congressman Max Rose (D), what is the most significant vote he has cast during his first and only term in office? If you know the answer, I am sure most of you answered that it was his vote to impeach President Donald Trump despite his earlier promise he would not do so.

Therefore you would figure that if he gives an extensive interview to a publication such as Vanity Fair, that he would be asked about that impeachment vote which is now political poison for him since his congressional district comprising Staten Island and part of Brooklyn is the most conservative district in New York City. Added to that he is currently in a very tough congressional race with Republican opponent Nicole Malliotakis.

As part of its effort by Vanity Fair to portray Rose as some sort of moderate despite his vote to impeach, the very first sentence of the introduction to the October 9 interview by Peter Hamby makes Rose seem as somehow a defender of Trump despite voting to remove him from office:

Staten Island Democrat Max Rose won his conservative-leaning New York congressional district in 2018 thanks in part to his brash persona and willingness to defend President Trump even if it rankled liberals in nearby Manhattan.

Later the Vanity Fair introduction again really really wants you to know that Rose is a moderate:

Rose talked about why the presidential polls are bullshit, why police need more funding—not less—and why it’s cool to be a “swagger-filled” moderate.

You rail against Bill de Blasio on the campaign trail.

Of course, what would have been really brave would have been if Rose had joined a few of his Democrat colleagues and voted against impeaching Trump. That he did not do so is something that apparently Vanity Fair wants to avoid reminding people, especially the voters in his district, about.