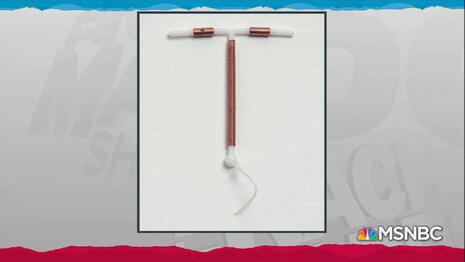 Need more proof that abortion is being used as birth control? Look no further than the calls to get IUDs “amid the fury and fear over [Supreme Court Justice Ruth Bader] Ginsburg’s death,” as reported by Vice’s Hannah Smothers on September 24.

Reportedly, in 2016, President Trump’s election led to a surge in IUDs (intrauterine devices that are a form of long-term reversible birth control) from people fearful about losing their cherished right to kill their unborn children. Supposedly, this also happened in 2018 with Justice Brett Kavanaugh’s appointment. Years later, abortion activists are still hyping the same hysterics that once again Roe v. Wade is on the line (after so many false alarms over the years I’ll only believe it when I see it).

An IUD works in one of two ways: It either prevents sperm from fertilizing the egg, or it prevents a fertilized egg from implanting in the uterus. The latter makes it a possible abortifacient, which has caused those with deeply held religious beliefs to object to being forced to provide it through health insurance (see: Hobby Lobby), but Vice is talking about women who would otherwise have abortions on unborn babies with beating hearts, so I don’t think IUDs would give them any moral qualms.

The abortion industry has created a permission structure where it’s ok to be lax about birth control because you can always “take care of it” after the fact with abortion. The possibility of the Supreme Court finally recognizing protections for the life of the unborn makes some women realize they need to take responsibility in ways they should have already. And supposedly that’s a burden.

Smothers says, “That it’s become rote for certain political events (or even deaths) to prompt personal health decisions is disturbing,” and I agree. It’s disturbing that abortion-friendly women aren’t already using reliable birth control when they know they don’t want to become pregnant. That the only reason they’re not being responsible and protecting themselves now is because they view abortion as another form of birth control is abhorrent.

Do they not see the irony in their insistence that we should “trust women” to make their own “choices about their bodies” and the fact that a significant enough number of women refuse to take responsibility for preventing pregnancy in their bodies until abortion could be off the table?

Smothers warns, “While Roe v. Wade prohibits states from making abortion literally illegal, other landmark cases that could be revisted [sic] under a new Supreme Court would give states nearly unlimited freedom to chip away at access in other ways.”

One example she cites is a Louisiana SCOTUS case that was decided this year – except the author doesn’t seem to realize it. June Medical Services, LLC v. Russo was decided on June 29 with a majority of the Court (including Chief Justice John Roberts, who dissented in Whole Woman’s Health v. Hellerstedt 2 years before) striking down protections for women’s health in favor of the interests of abortionists. And yet, bizarrely, Smothers appears to hold out June Medical as a potential case that a new Supreme Court justice could rule on, thus restricting abortion in the future:

A case out of Louisiana could revise the decision the Court made in Whole Woman’s Health v. Hellerstedt, the 2018 case that found H.B. 2, a Texas law that targeted restrictions at abortion providers (or TRAP law), to be unconstitutional. Ginsburg wrote the concurring opinion for the case, establishing that any law that seeks to protect women’s health by placing undue burden on abortion providers is not legal…

Even though the case is only two years old, as Robin Marty, author of The End of Roe v. Wade and A Handbook for a Post-Roe America, said on the Majority Report last year, the Fifth Circuit Court in Louisiana has already said the ruling should be revisited. Doing so could enable states to enact any number of arbitrary restrictions on abortion procedures, which proved a highly effective strategy in Texas: Under H.B. 2, the number of abortion clinics shrank to single digits.

The fact that Smothers doesn’t seem to know that the Louisiana case has already been decided and opposes “any law that seeks to protect women’s health by placing undue burden on abortion providers” sums up the pro-abortion movement in a nutshell: uninformed on current legal, political, scientific, and medical realities at best, deceptive at worst, morally bankrupt always.