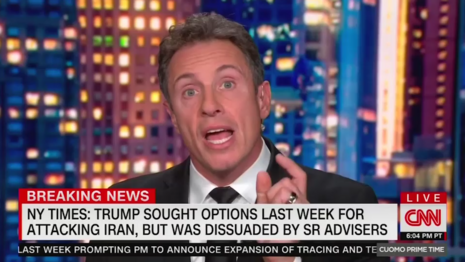 Since the November 3 election, many TV journalists have begun issuing ugly calls for vengeance and “accountability” against not just President Trump himself, but also his administration, and even his supporters.

Evidently some journalists found the last four years so intolerable that a looming Biden Presidency has made them bitter, sore winners. Just a day after the election was held, MSNBC political analyst Jason Johnson had this advice for Biden: “You cannot come into this White House with the idea that these people [Republicans] aren’t the enemy. They are.”

Over the course of several evenings in mid-November, CNN’s Chris Cuomo issued a series of threats and warnings against so-called “enablers” of President Trump. On November 11, he declared: “Shame on them. A wax museum is less cold-blooded than these people are. And let them know, they are going to lose way more than this election.”

On November 27, former ESPN and MSNBC host Keith Olbermann wished for enough Trump administration people in prison “that they can hold reunions, and birthday parties.” He continued:

“We want the prisons so filled with Trumps, and Trump flunkies, and Trump apologists, and Trump enablers, that we have to convert Trump buildings into new God-damned Trump prisons.”

It seems the calls for unity are over. To see some of the media’s most venomous calls for retribution against Trump supporters, watch the video below (LANGUAGE WARNING):