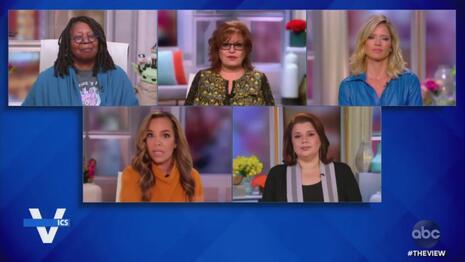 Monday, The View tried to compete with CNN in who could come up with the most outrageous analogies to trash President Trump for getting COVID-19 and taking a doctor-approved car ride around the hospital to wave to supporters gathered. While they lacked sympathy for the president, they fretted that Kamala Harris could get sick from Mike Pence at the upcoming debate, even though he tested negative and hasn’t been around Trump.

After Behar lashed out at the president for his drive-by around Walter Reed, calling it “right out of the dictator’s playbook,” the hosts moved on to worry about Harris contracting the virus from Pence at Wednesday’s debate. Sunny Hostin fretted it would be like the Amy Coney Barrett announcement or “Rose Garden Massacre,” as she put it, where a handful of people out of 150 present have tested positive for coronavirus. Neither host seemed to understand that contracting a virus which the majority of people have recovered from, isn’t a death sentence.

While both co-hosts pushed for a “virtual” vice presidential debate, they also suggested “hosing” the vice president down with insecticide or putting up plexiglass dividers:

JOY BEHAR: Well, isn’t Pence going to some kind of a rally in Illinois any minute now? And you know they won’t be wearing masks there. These Republicans are like the Typhoid Marys of the 21st century. I don’t trust it…So I would say to Kamala, either spray him down or hose him down with insecticide or whatever they have to use, or else don’t go.[laughter]  I would not go near Pence right now. He’s all over the place.

SUNNY HOSTIN: I’m not comfortable. I’m not comfortable with it at all, actually. I’m not comfortable with it because if you think about it, that Rose Garden massacre event where Amy Coney Barrett was, you know, introduced to folks, we have I don’t know how many people now that are positive from that event, but Pence was sitting directly in front of Mike Lee who is positive. Why is Pence not isolating? Why? The CDC guidelines require that he be — his own government’s guidelines require that he be isolating for 14 days. Isn’t he the head of the coronavirus task force? He’s not following the task force’s own guidelines, and as Joy mentioned, he’s just going around to rallies. I would like to see if they are going to do this — this debate, something that we saw with Lindsey Graham and Jaime Harrison. Jaime Harrison brought his own plexiglas huge divider! Kamala needs a whole box around her if she’s going to be — a whole box if she’s going to be anywhere near Vice President Pence because that was Covidpalooza!

WHOOPI: Kamala, I’m going to send you some plexiglass because I don’t want anything in your way when you take care of business.

While smearing the Vice President as a super-spreader, the hosts rehashed some of their usual hatred for the Christian VP’s ethics:

WHOOPI: Well, he’s not going to get that close to her because, you know, he can’t be in the room with another woman unless his wife is close by.

BEHAR: What if mother comes Whoopi?

You can contact The View’s advertiser Carvana at the Conservatives Fight Back page here.