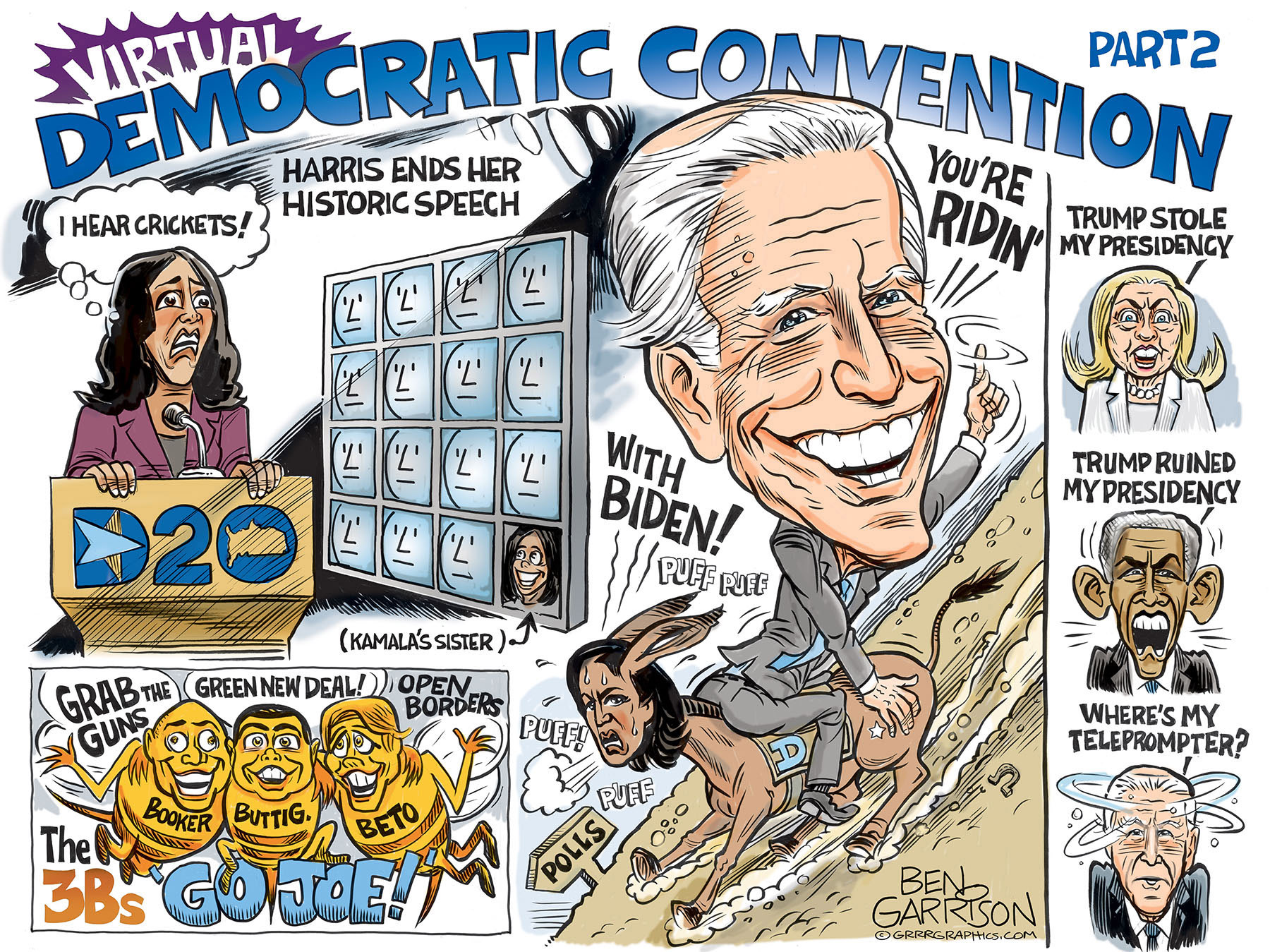 The ‘virtual’ 2020 Democratic Convention is over and I wasn’t impressed. The format, the social distancing, and the mask-wearing was annoying enough, but they also presented a hokey bank of monitors to show an applauding ‘crowd.’ They flashed the generic clappers in the background, but it was a bit late for Kamala’s ‘historic’ speech. When she finished she momentarily stood there without applause or direction. Finally, Biden came out to give her a hug…but NO! He socially distanced himself. It was all awkward, dehumanizing, and phony. Just what the DNC and Hillary ordered. Hillary has been notorious for scripting and planning out her responses. The 2020 convention had Hillary’s vodka-soaked fingerprints all over it.

The convention in Sean Hannity’s words was turned into ‘an infomercial’ and I agree. It also enabled the DNC to plot, plan, and sanitize their convention. No boos occurred such as what we heard during Hillary’s convention. Hillary fixed that. There was no discontent. There was no mention of the ongoing rioting, looting, and mayhem being committed in the Democrat-controlled big blue cities. All negativity was directed at President Trump. The Democrats accepted no blame for anything. To them, everything is Trump’s fault.

Without audience participation, the convention smacked of contrived theater. We saw the usual suspects including the ‘3 B’s,’ Booker, Buttigieg, and Beto, and presumably, they will communicate their far-left policies to Biden, but there was nothing really new or inspiring at the heavily-edited convention. Hillary was her usual Putin-hating, Trump-hating self. Obama’s speech didn’t praise Joe so much as attack Trump as a threat to ‘our democracy.’ He repeated ‘our democracy’ over and over, and when I heard it I always thought he meant ‘our socialism.’ We’re not a democracy, we’re a republic.

Biden surprised me with his speech. I didn’t hear any obvious gaffes and he spoke well. What he said was long on vague platitudes such as ‘restoring dignity’ and short on policy. I kept wondering if he was given a pill or shot to boost his mental alertness. Or it could be that he’s just good at reading a teleprompter. CNN went nuts and said it was the best speech Joe every made. I thought it was very forgettable.

Biden will no doubt return to his old mumbling, stumbling, gaffe-machine self when he debates Trump. He will sorely miss having a teleprompter.