Warpaint, the Kansas City Chiefs long-time pony mascot, has been deemed politically incorrect, booted out of the ball game and her official web page has been removed. She’s the latest victim of the purging of Indian nicknames and traditions amid the woke madness that’s ruining pro sports.

A sorrel tobiano mare, Warpaint ignited the fans by galloping on the field at the start of the Chiefs’ home games and after the team’s touchdowns. Her rider was dressed in Native American attire. The tradition first began in 1955, and after a long lapse, Warpaint returned in 2009 and resumed the Chiefs’ tradition.

Warpaint joins the Cleveland Indians, their Chief Wahoo mascot, and the Washington Redskins on the list of team names and symbols exiled from sports venues by the snowflakes of wokeball.

Chiefs President Mark Donovan on Monday made the announcement that the team had gone queasy on Indian associations in this cancel culture climate. “We feel like it’s time to retire Warpaint. Lot of reasons for that, but we just feel like it’s the right thing to do. So, Warpaint won’t be running at Arrowhead anymore.”

Then came some trite mumbo jumbo from Donovan about getting educated.: 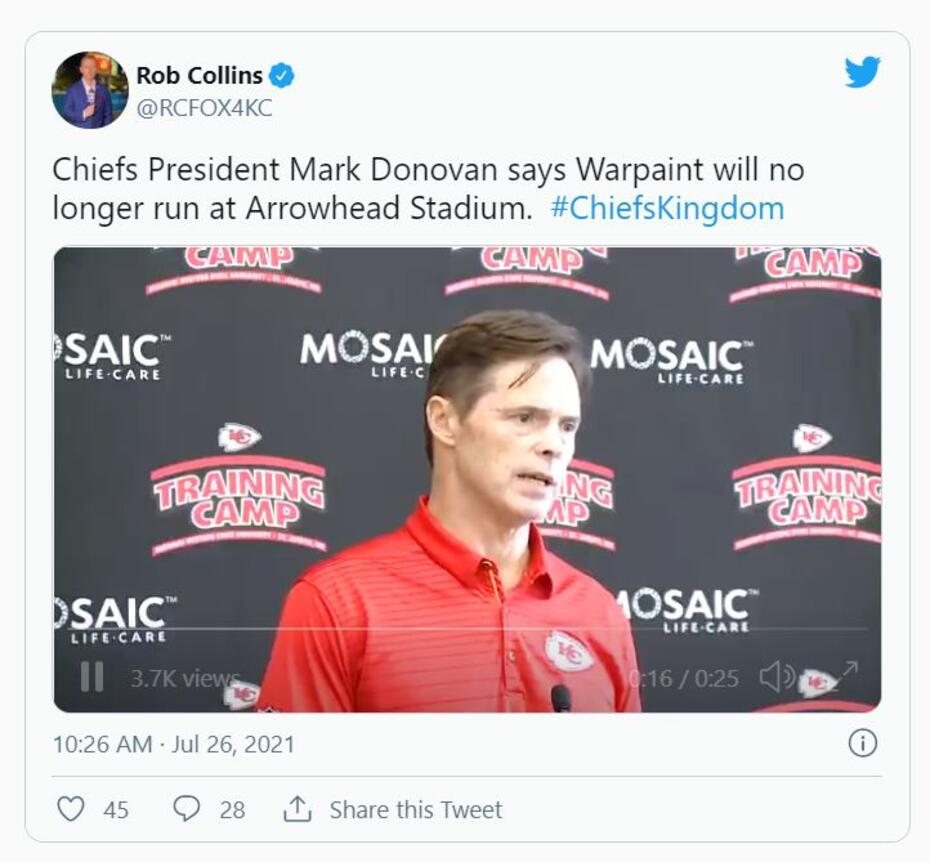 “We made some significant changes last year, which we are proud of and we believe were the right things to do,” Donovan said of the working group that tried to make this look like some kind of deeply thought-out decision. Yada-yada-yada.

With Warpaint banished from Arrowhead Stadium, the Kansas City virtue signalers are turning their attentions to further cleansing of their native traditions.

There’s a drum that is beaten at the start of every home game, and it’s now the focus of future slings and arrows. Donovan had some more sappy comments about this soon-to-be Chiefs’ artifact, too.

“It’s a really strong point of pride for them,” Donovan said of his working (woking?) group. “If you even have the conversation, ‘Should we think about removing the drum or doing something different?’ they get pretty emotional about what it is. We took the right steps, which they guided us on, to bless the drum, treat it in a respectful way and to use that opportunity to educate people as to what the drum really means in their culture.”

The Cleveland Indians last week announced they’re going to change their name to the Guardians. It’s in recognition of a – yawn — bridge in the Ohio city. The Washington Redskins have failed to come up with anything better than the Washington Football Team.

It’s a foregone conclusion that the Chiefs and Atlanta Braves nicknames will eventually go the way of the Dodo bird, as well. The Chiefs may as well grab Virtue Signalers while it’s still available as a nickname. It’s the woke thing to do.