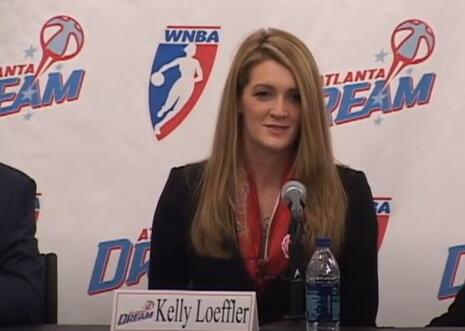 By courageously standing alone among professional sports owners in public opposition to Black Lives Matter, U.S. Sen. Kelly Loeffler (R-GA) is being branded a “villain” by The Washington Post. However, Newsweek Sports gave the Georgia conservative a forum to stand her ground and double down on her criticism of the Women’s NBA for promoting BLM.

In James Crowley’s Newsweek story, the Republican Senator and 49 percent owner of the WNBA’s Atlanta Dream is characterized as a frequent critic of the Black Lives Matter movement. Members of her own team demanded she sell the club and are openly campaigning for one of her election opponents. “But even amid recent protests from WNBA teams following the Jacob Blake shooting incident, Loeffler said that she won’t sell the team,” Crowley wrote.

In July, the WNBA endorsed BLM. Now its players are performing BLM rites and rituals, and their playing courts are adorned with BLM messages and imagery. Loeffler disagreed with this and complained that she was not consulted in that decision. She also disagreed with last week’s WNBA boycotts over the Jacob Blake killing: “Walking away from that moment prevents us from having those important dialogues.”

Loeffler distinguishes between the “statement” Black Lives Matter and the BLM organization, which she accurately characterized as advocating for defunding and abolishing police departments and the U.S. military, emptying prisons, promoting the LGBT agenda and destroying the nuclear family. BLM engages in violence and anti-Semitism, and the senator said, “this is not what our league stands for … I don’t think they have a place in sports. Sports need to be about unity and bringing us together.”

In Newsweek, the Trump-backing Loeffler said: “It’s very important we have conservative voices in sports, people that are willing to speak out and stand up for what’s right for our country.” But one lonely voice of dissent is verboten by the feminazis of the WNBA to stomach.

Candace Buckner’s Washington Post story said Loeffler’s stand made her the “archenemy” of her own team. The push back against her has been “fierce” and the chasm between her and the league’s social justice warriorettes has widened.

Opposing the league’s activism were Trump supporters who renewed calls for athletes to “stick to sports,” “a favorite culture-war battle cry,” said Buckner. “Loeffler joined the fight, sending a letter to WNBA Commissioner Cathy Engelbert objecting to what she deemed the politicization of the game. Racism has no place in the United States, Loeffler wrote, but the Black Lives Matter political movement’ does not align with the league or her team.”

To help strengthen the case against the “villain” co-owner of the Dream, Buckner quoted an African American man who last coached the team three years ago. Everyone obviously wonders what Michael Cooper has been thinking since his 2017 firing, and it’s this: Sen. Loeffler’s conservative politics are “painful to watch.”

In The Post‘s version of The Rise Of Michael Cooper, he ripped into Loeffler. “I never, never saw what is coming out now. I am very hurt and upset and disheartened that, with the Black Lives movement going on, she would let her political views spill over into that.”

During a campaign appearance Monday in Savannah, Loeffler said she’s been helping the President drain the swamp in Washington. And without stating it, the courageous conservative is also attempting to drain the social justice swamp that is now professional sports. She’s badly out-numbered, but swimming against the prevailing tide is what courage is all about.