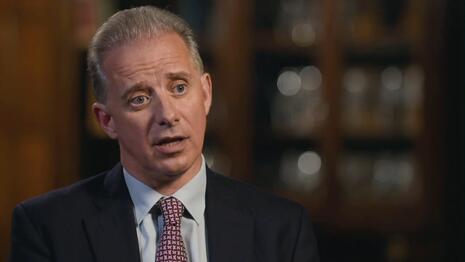 2845. That was how many words that the Washington Post fact checker Glenn Kessler belatedly used on Thursday to try to explain away why the Washington Post, along with much of the rest of the media, for years treated the now-discredited Steele dossier as some kind of investigative “bombshell” endangering Trump.

In an “explainer” piece headlined “The Steele dossier: A guide to the latest allegations,” Kessler admitted “There is an old saying in journalism: You’re only as good as your sources. Now a Nov. 3 indictment of [Igor] Danchenko on five counts of lying to the FBI has suggested that Steele’s sources were not very good at all.”

This is embarrassing to Kessler and the Post, who very much wanted Steele’s smelly dossier to be credible. This new piece is in stark contrast to the April 24, 2019 Glenn Kessler who piously proclaimed that “The dossier is a political Rorschach test. Depending on your perspective, it’s either a hoax used to defame a future president or a credible guide to allegations about Trump’s involvement with Russia.”

Sorry, Glenn. It was a hoax used to launch a thousand collusion stories in newspapers and newscasts. It’s thousands of tubes of toothpaste that can’t be put back in the tube. He explained:

The dossier was eagerly described on cable news shows and referenced by Democrats in congressional hearings. The fact that the dossier’s funding was traced to the Clinton campaign — and that Steele had actively pitched the findings to news reporters — gave Trump and his defenders an opening to try to discredit the Russia-related investigations as partisan-inspired witch hunts.

But the dossier was darkening Trump’s reign before he was even inaugurated, and the Clinton campaign’s funding wasn’t revealed until nine months later. It’s not an “opening,” but a reality that the Steele dossier was a “partisan-inspired witch hunt.”

Kessler added “The Danchenko indictment has further bolstered the perception, especially on the right, that the dossier was a smear campaign orchestrated by Trump’s opponents.” Perception? 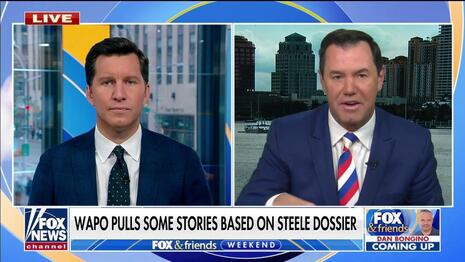 Because the Washington Post along with Kessler were eager to embrace the supposed veracity of the Steele dossier, they are now engaged in a major backtrack consisting of deleting a couple of stories as well as altering at least fourteen more. This did not go down well with Politico’s Jack Shafer, who urged on Wednesday for the preservation of the original stories, in “Let’s Not Consign Journalistic Transparency to the Memory Hole.”

What’s peculiar about the Post’s method of error correction was its decision to vaporize the two original stories. The original stories can’t be retrieved from LexisNexis, as the Post left that database in late 2020. Post spokesperson Kristine Coratti Kelly tells me the deleted pages can be found on Factiva, a Dow Jones subscription database, but Factiva costs about $249 a month, which makes it expensive for readers who can’t afford the service to determine precisely what the paper’s first rough draft got wrong and how it was amended.

Such heavy reworking of years-old copy is so rare it approaches the unprecedented, as American University media history professor W. Joseph Campbell told Farhi. Stephen Bates, a professor of journalism at the University of Nevada at Las Vegas, concurs. “It’s hard to have a paper of record if the record keeps changing,” Bates says.

Our main beef isn’t that the Post flubbed a story. Lots of outlets flub stories. Many gave too much credence to the Steele dossier story, as Bill Grueskin just detailed. The issue is how the paper should handle its flubs in the light of new information. Ordinarily, when outlets make mistakes, they note it in a corrections column and append the correction to the original in the web archives to render transparent both the error and the revision. Often, such corrections require moderate bits of rewriting, but rarely to the extent of the Post’s two dossier stories.

…Back in pre-web days, the best way to keep tabs on a newspaper’s honesty quotient (short of stealing somebody’s LexisNexis account) was to clip stories or check microfilm. Then came the web, and it became an easy matter to dial up a newspaper’s back pages. But no more. At some publications, the written record can be expunged if it contains embarrassing information. Now the Post is tossing old, flawed stories down the memory hole. Is this how journalism dies … in darkness?