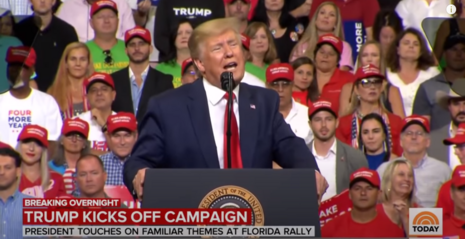 The completion of the Democratic National Convention and the approaching Republican counterpart has effectively launched the final stage of the 2020 presidential campaign. And The Washington Post has hit the panic button.

In an editorial that is filled with a combination of wild untruths and hysteria, The Post trembles that the end of democracy is nigh if Trump is re-elected. The piece begins by citing its equally hysterical 2016 anti-Trump editorial, saying this:

“Four years ago, after Mr. Trump was nominated in Cleveland, we did something in this space we had never done before: Even before the Democrats had nominated their candidate, we told you that we could never, under any circumstances, endorse Donald Trump for president. He was, we said, “uniquely unqualified” to be president.

‘Mr. Trump’s politics of denigration and division could strain the bonds that have held a diverse nation together,’ we warned. ‘His contempt for constitutional norms might reveal the nation’s two-century-old experiment in checks and balances to be more fragile than we knew.’”

Then the paper was off and running, saying this:

“A second term might injure the experiment beyond recovery.

And so, over the coming weeks, we will do something else we have never done before: We will publish a series of editorials on the damage this president has caused — and the danger he would pose in a second term.”

Then they start in. The very first Trump failure is the handling of the coronavirus.  But curiously The Post forgets the kind of advice on the virus that was being dished out to the American people – by The Post.

Here, for example, is The Post headline from February 1st.

Get a grippe, America. The flu is a much bigger threat than coronavirus, for now.

In which the paper says this, bold print for emphasis supplied:

“The rapidly spreading virus has closed schools in Knoxville, Tenn., cut blood donations to dangerous levels in Cleveland and prompted limits on hospital visitors in Wilson, N.C. More ominously, it has infected as many as 26 million people in the United States in just four months, killing up to 25,000 so far.

In other words, a difficult but not extraordinary flu season in the United States, the kind most people shrug off each winter or handle with rest, fluids and pain relievers if they contract the illness.

But this year, a new coronavirus from China has focused attention on diseases that can sweep through an entire population, rattling the public despite the current magnitude of the threat. Clearly, the flu poses the bigger and more pressing peril; a handful of cases of the new respiratory illness have been reported in the United States, none of them fatal or apparently even life-threatening.”

The day before, on January 31st, The Post reacted negatively to the news that Trump was banning travel from China. It sought out a Chinese Foreign Ministry spokesperson and obligingly wrote this:

“But even before U.S. officials announced such a drastic escalation in travel restrictions on Friday, China’s Foreign Ministry criticized the United States for making “unfriendly comments” during the coronavirus outbreak and said a U.S. warning against travel to China went against recommendations made by the World Health Organization to not restrict travel or trade. ‘In disregard of WHO recommendation against travel restrictions, the US went the opposite way,’ the ministry’s spokesman said in English-language messages on Twitter on Friday. ‘Where is its empathy?’”

By March 19th, The Post had changed its tune on the virus and went in the opposite direction, saying:

“…America is on a trajectory toward 1.1 million deaths. That model envisions the sick pouring into hospitals, overwhelming even makeshift beds in parking lot tents. Doctors would have to make agonizing decisions about who gets scarce resources. Shortages of front-line clinicians would worsen as they get infected, some dying alongside their patients. Trust in government, already tenuous, would erode further.”

As this is written, there have been 174,000 deaths in the US from the virus. Not over a million, as The Post predicted. Now, in this recent editorial, it says:

These are facts. This is reality. And the excess deaths and illness are directly attributable to Mr. Trump’s failures of leadership.”

Hello? Can anyone at The Post do math? Here are the facts. Here is reality. Subtract 174,000 actual deaths in the US from The Post’s projection of 1.1 million deaths and that means The Post was off by some 926,000 deaths that did not happen on Trump’s watch. That is fact. That is reality.

One could go on – and on and on. The Post was out there supporting the anti-constitutional impeachment hoax. The paper says:

“….America’s standing in the world, loyalty to allies, commitment to democratic values, constitutional checks and balances, faith in reason and science, concern for Earth’s health, respect for public service, belief in civility and honest debate, beacon to refugees in need, aspirations to equality and diversity and basic decency — Mr. Trump torched them all.”

All of which is Swamp lingo for anger that the special privileges of Establishment elites are being endangered by a president elected to ensure that allies were paying their fair share of NATO dues, that “faith in reason and science” be applied to abortion and not simply played to the political satisfaction of leftist environmentalists. Respect for public service? How about respect from elites for the average men and women who get up everyday and make the economy work, who want their kids educated and not propagandized, who believe in free trade that is fair trade?

So The Post is off and running on its election year spin that the American people are a bunch of uneducated bigots who need to be told what to do by Washington elites.

There is undoubtedly worse to come.

And in this space, we will be watching.