WashPost Election Threat: Biden Must Win Landslide or Else, Violence and Catastrophe! Nice little country you got there. Wouldn’t wanna see nuthin’ happen to it, like violence in the streets and a constitutional crisis. So better give Biden a landslide—capiche?

That’s the very unsubtle messsage the Washington Post sent readers on Thursday by posting a column by Rosa Brooks, head of the so-called “Transition Integrity Project.”  The supposed goal of the project was to game out various election scenarios. And—surprise!—the only one in which things go smoothly is if Biden wins a landslide. As Brooks writes:

“A landslide for Joe Biden resulted in a relatively orderly transfer of power. Every other scenario we looked at involved street-level violence and political crisis.”

Perspective: The election will likely spark violence — and a constitutional crisis.

In every scenario except a Biden landslide, our simulation ended catastrophically. https://t.co/E3tugZBuBj

And to make sure absolutely no citizen misses the point, the Post illustrated the column with a drawing of President Trump throwing an Orange Man tantrum, literally clinging to the Oval Office curtains, refusing to be removed.

To game out her election scenarios, Brooks assembled a group of political types. And here’s where the lack of integrity in the “Transition Integrity Project” becomes apparent. Because whereas Brooks tries to pass off her group as “bipartisan,” in fact it is uniformly composed of rabid opponents of President Trump. 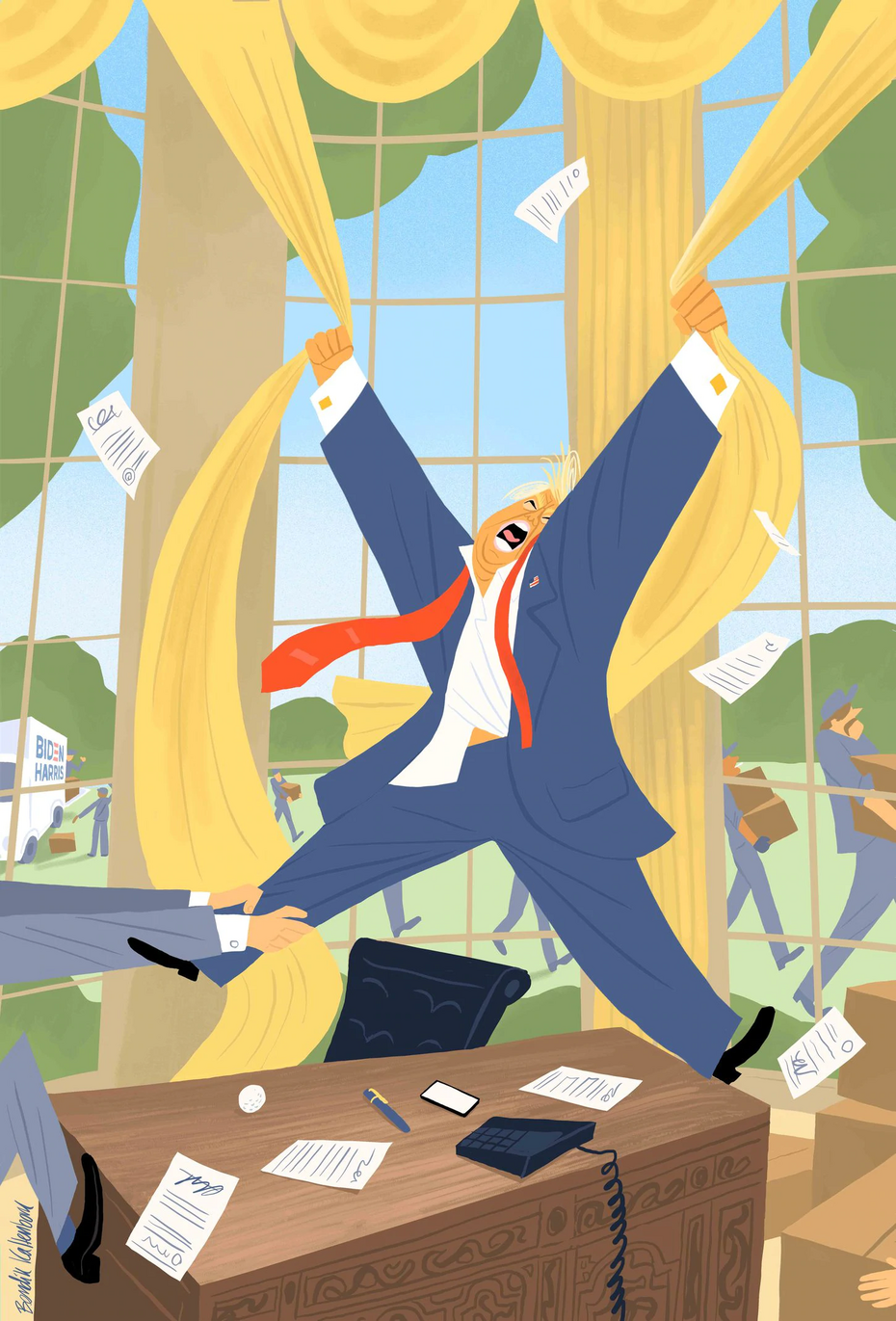 And on the Republican side, they are . . . also Biden supporters! There’s Michael Steele [a recent recruit to The Lincoln Project, dedicated to destroying President Trump]. Bill Kristol, organizer of “Republican Voters Against Trump.” And Trey Grayson, a former Kentucky state official who’s the sort of Republican who co-chaired the Gabrielle Giffords Gabby PAC with . . . Robert Reich!

Brooks herself is also a hard-core left-wing partisan. As I wrote back in July:

“Her leftist resume includes serving as special counsel in George Soros’s foundation. She also held two different jobs in the Obama administration. And as I chronicled back in 2006, she was a virulent hater of then-President George W. Bush, analogizing him to Hitler, and enumerating the various ways in which she hated everything he did and stood for.”

Note that in her recommendations to avoid disaster, Brooks seeks to recruit the media to her cause–something she can certainly count on. In particular, she wants the MSM to aid and abet the “red mirage” scenario that the left has recently begun to peddle.

The notion is that on Election Night, President Trump might appear to have won a landslide. But over the course of the ensuing weeks, when all the mail-in ballots have been counted, Biden will emerge as the overwhelming winner. Writes Brooks [emphasis added]:

“The media also has an important role. Responsible outlets can help educate the public about the possibility — indeed, the likelihood — that there won’t be a clear winner on election night because an accurate count may take weeks, given the large number of mail-in ballots expected in this unprecedented mid-pandemic election. Journalists can also help people understand that voter fraud is extraordinarily rare, and, in particular, that there’s nothing nefarious about voting by mail.”

In other words, the MSM needs to “educate,” i.e. bamboozle, Americans into accepting a lengthy delay, while Democrat minions go busily about “finding” sufficient ballots to make Biden the winner. There’s trunkloads of ’em out there, I tell ya!

In sum, the “Transition Integrity Project” is a fraud—a thinly-veiled attempt to scare and stampede Americans into giving Biden a big victory. And the Washington Post is only too happy to aid and abet the Biden-landslide cause.