What Are They Smoking? Celebs Say Biden Beat ‘Lunatic’ Trump in Debate ‘By a Mile’

No surprise here, in La La Land Joe Biden was declared the obvious winner of the second and final 2020 presidential debate. Though you have to wonder in what alternate universe these people were watching the debate. 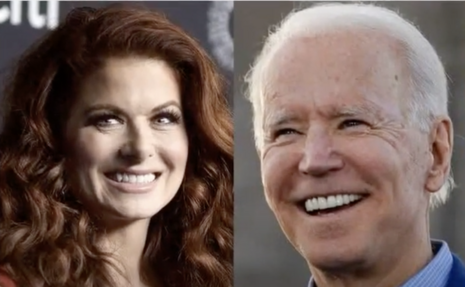 Stakes were high for Trump – so the pundits said – in this final debate of his reelection campaign. According to the polls, Trump has been trailing Biden in the race and had to come up with a good debate performance. He gave a good, calm showing that was undoubtedly aided by Joe Biden’s old, recycled “orange man bad” talking points, meandering delivery, vocal flubs – like the time he called “The Proud Boys” the “poor boys” – and his far-left policies.

Despite the obvious difference in performance quality, Hollywood celebs like Bette Midler, Mark Ruffalo and Debra Messing argued that Biden won easily. Man, it must be all that legal weed in California.

She added, “His name will live in infamy.  Which reminds me…is StephenMiller dead? Over 540 children will never see their families again.” Miller, one of Trump’s senior policy advisors, has been recovering from a Wu-Flu infection. What a nice sentiment from Midler to a sick man. 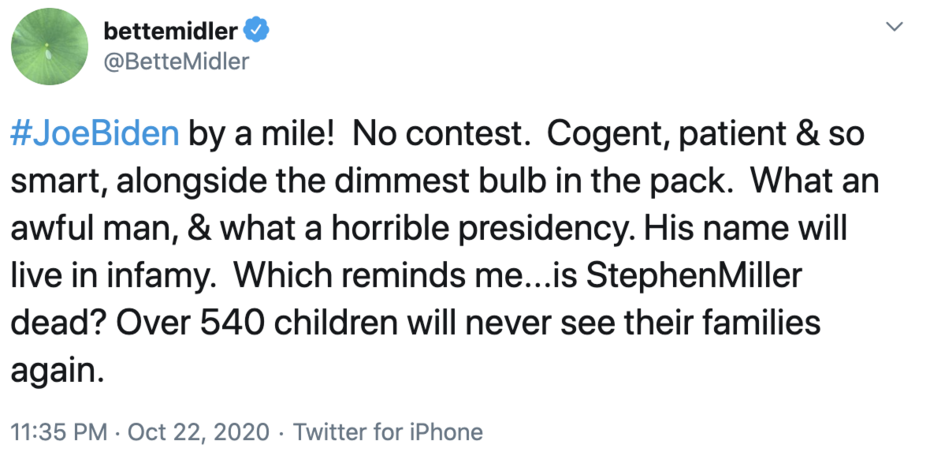 And speaking of 540 kids – she’s referring to the ones detained at the border – VP Biden was there when the Obama administration released scores of illegal immigrant children to human traffickers because of the Obama team’s lax regulations on who kids were allowed to be released from custody to.

Avengers actor Mark Ruffalo tweeted, “Joe Biden spoke the Truth with grace and poise and stood his ground against every one of Trumps lies. #BidenWon.” Whatever you say, Mark. Though his answer sounded more like he was compensating for Biden’s performance.

He also tweeted earlier in the evening, “I want to live in a country where we have a President who isn’t a colossal liar. #WithBidenWeCan.” We still have to see how Hunter’s “laptop from hell” plays out before making that call.

Will & Grace star Debra Messing wrote that “Trump did not tell America what he was going to do if he is re-elected.” She added, “He just was a raving lunatic while Biden systematically *answered the questions in detail. #BidenWon.” Though that seems quite ironic in defense of a man who can’t give a straight answer on fracking, won’t say a word to anyone about he and his son’s potentially corrupt dealings with foreign countries, and says Americans won’t know whether his administration will pack the Supreme Court until after the election.

Well, Biden did admit his desire to “transition” America from the oil industry. That one was clear, to his detriment.

Either way, Dems probably saw a lot of what they like in Biden and what they hate in Trump. They were always going to declare Biden the winner. But it is strange to see them scramble to say he did so well. It’s like they’re really trying to convince themselves he’s a passable candidate.