Why No Pinocchios or ‘Pants on Fire’ Ratings for Biden’s Big Convention Speech? 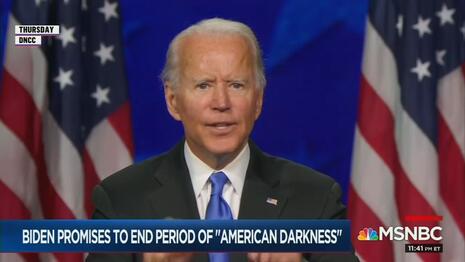 CNN’s Brian Stelter accurately reflected the liberal arrogance that Biden’s speech fileting Trump was “largely accurate,” but there were some obvious red flags in this speech that a truly objective fact watchdog should have evaluated as something less than accurate, and often False. For example:

1. Biden promised to win “For all the young people who have known only an America of rising inequity and shrinking opportunity.”

This not only flies in the face of economic recovery in the first three years of Trump, it blatantly disparages the economic record of Obama-Biden.

2. “Just judge this president on the facts: Five million Americans infected with Covid-19. More than 170,000 Americans have died. By far the worst performance of any nation on Earth.” And he repeated it later: “The tragedy of where we are today is it didn’t have to be this bad. Just look around. It’s not this bad in Canada. Or Europe. Or Japan. Or almost anywhere else in the world…We lead the world in confirmed cases. We lead the world in deaths.”

That depends on whether you’re measuring raw numbers, or measuring deaths per 100,000. FactCheck.org flagged Trump earlier in August with a chart that shows America was eight worst (sixth if you discount tiny nations like Andorra and San Marino). Measure by death rate per coronavirus case, and the U.S. ranks 48th at 3.11 percent.

3. “Nearly one in six small businesses have closed this year.”

This really should have sent the fact-checkers in action — a Chamber of Commerce poll  found only one percent of respondents said they’d closed permanently.

4. Biden honored President Obama: “You were a great president. A president our children could — and did — look up to. No one will say that about the current occupant of the office.”

It may vex Biden, but many MAGA-hat Trump fans would tout Trump as someone to look up to.

5. “As president, I will make you this promise: I will protect America. I will defend us from every attack. Seen. And unseen. Always. Without exception. Every time.”

Is that the actual record of the Obama-Biden administration? A fact-checker could cite foreign terror attacks on Americans (Benghazi) or domestic terror attacks (San Bernardino, Fort Hood, the Boston Marathon bombing). No administration can stop all terrorist attacks. But that means candidates shouldn’t say they will defend America from “every attack…without exception.”

6. “Nor will I put up with foreign interference in our most sacred democratic exercise — voting.” Again, how did the Obama-Biden administration do on Russian interference? Now, the Democrats insist the Russians fouled our next in 2016….and who was in power?

7. Most egregiously, Biden once again dropped his “bottomless Pinocchio” and claimed Trump praised neo-Nazis and racists, when he explicitly condemned them. “Remember the violent clash that ensued between those spreading hate and those with the courage to stand against it? Remember what the president said? There were quote, ‘very fine people on both sides.’”

PolitiFact has laid out that reporters pressed Trump into explicitly declaring “I’m not talking about the neo-Nazis and the white nationalists — because they should be condemned totally.” But Biden never gets a “False” rating when he says this.