The media repeatedly tells us it is their job to hold people in power– like President Trump –accountable. Yet they refuse to do so when it’s their liberal billionaire buddies who are in trouble.

Case in point: Netflix’s CEO went on CNN this morning for a ten-minute interview where the host didn’t even ask ONE question about the child pornography controversy and boycott his company is facing. Instead, CNN Newsroom co-anchor Poppy Harlow gave Netflix co-CEO Reed Hastings an almost entirely softball interview. She even found time to praise the company for being ahead of its competitors in “diversity” programming and leadership.

Last month the streaming platform faced backlash for its promotional poster for the French film, Cuties, a Sundance award winner, which features a group of pre-teen girls wearing skimpy outfits and posing in sexually suggestive poses. That prompted an apology from the company, but they still decided to keep the film’s release date, which was yesterday. Now that the movie is out, it’s facing a massive boycott which is even trending on Twitter, for having child nudity as well as highly sexualized dance routines and other disturbing content exploiting young girls. 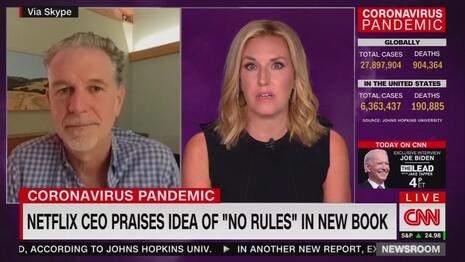 Clearly doing damage control for Netflix, Harlow wouldn’t ask about the #CancelNetflix boycott or the growing outrage. Hastings was out with a new book on Netflix’s corporate culture and Harlow dutifully stayed on-topic asking him questions about the Netflix workplace and how he runs the company. The only semi-critical question she asked was the last one of the interview. Harlow gently asked if he would “still stand by” his decision to kowtow to Saudi Arabia Crown Prince Mohammed bin Salman by pulling an episode of a show that blamed him for the killing of journalist Jamal Khashoggi: “Can you explain why and if you would make the same decision today, or was that a mistake given your support of the free speech and First Amendment?” she asked.

Netflix has a huge problem with their “entertainment” glamorizing and condoning pedophilia and child pornography. But you won’t see anyone on CNN asking their CEOs, Susan Rice or the Obamas about this seriously disturbing problem. At least they haven’t yet.

It’s not just CNN that’s covering for Netflix. If you look at media headlines on the Cuties controversy, it’s almost exclusively news and entertainment outlets praising the film and bashing conservative critics for daring to be upset at child pornography.

Contact CNN’s advertisers CarShield and Uber by following the links if you think they shouldn’t approve of CNN helping Netflix avoid scrutiny.