WRONG: CNN Reports 7.9% Unemployment Is Highest Before Election, But It Ties 2012 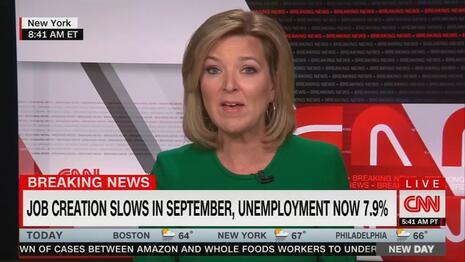 When the BLS put out its report showing unemployment had dipped below expectations to 7.9 percent in September from 8.4 percent in August, CNN rushed out a Tweet  laced with propaganda: “JUST IN: The US added 661,000 jobs in September, and unemployment fell to 7.9%. The rate has never been this high going into an election.”

This is false. In the last BLS jobs report released November 2, just before the November 6, 2012 election, just before Barack Obama was re-elected, The New York Times reported that “The unemployment rate ticked up slightly to 7.9 percent in October, from 7.8 percent in September.”

Here is the Friday report by Anneken Tappe of CNN Business that also kicks off with the erroneous title of “Trump has the worst job losses on record heading into the election” and repeats it on the third line.

Heading into the November election, the US jobs recovery is running out of steam.

The economy added 661,000 jobs in September, the Bureau of Labor Statistics said Friday. The unemployment rate stood at 7.9%.

This is the highest the unemployment rate has been ahead of a presidential election since the government started tracking the monthly rate in 1948.

Despite the unemployment rate caused by the COVID-19 lockdowns has already dropped far beyond expectations from 14.7% in April to the current 7.9%, Tappe labels the latest drop of 0.5% as “running out of steam.”

The Trump economy’s unemployment rate, having been battered by a pandemic-induced coma and state shutdowns, is literally the same unemployment rate former President Barack Obama had (without any of the COVID factors) when he walloped then-candidate Mitt Romney. CNN ignored this.

The headline itself is also uncharitable. Tappe made the false equivalency that “Comparing presidents’ jobs records in their first 44 months in office over the same time period [since Harry Truman], Trump comes last.” Tappe actually used January 2017 and September 2020 in the Trump presidency as the baseline for her argument, which would include the COVID-19 shutdowns. Did Tappe consider that no other president in history has had to endure an epidemic of states shutting down their economies?

UPDATE: CNN has updated its online story by noting that the October 2012 unemployment rate was initially reported before the election that year as 7.9% but later revised to 7.8%. Just as the current September report could also be revised.

In 2012, when the country re-elected President Barack Obama, the pre-election unemployment rate was initially also reported at 7.9%, before getting revised down to 7.8%.

Because Election Day 2012 was November 6, the public was able to see the October report which came out days earlier on November 2. This year Election Day is November 3 so the October report, which could likely show less than 7.9% unemployment rate, won’t come out until after the election on the first Friday of November which is November 6. Therefore it is more than possible that the Trump election October unemployment rate report could be less than the Obama October jobs report.