The Wall Street Journal Editorial Board just ripped apart the absurdity of “Bidenomics.” 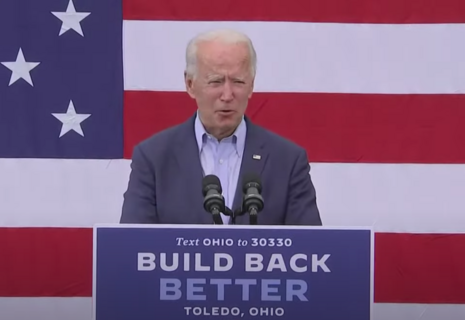 Hint: it most definitely is not “well-grounded in mainstream economics” as New York Times economist Paul Krugman would have people believe.

In an editorial headlined “The Cost of Bidenomics,” The Editorial Board wrote that Democratic presidential nominee “Joe Biden has shrewdly kept the campaign focus on Covid-19 and President Trump, which has helped him avoid having to talk much about his own policies.” However, that’s especially “true of his economic proposals, which a new study out Sunday from the Hoover Institution shows will have a damaging impact on growth, job creation and household income.” The editorial revealed one of the big findings from the study. Specifically, Biden’s tax, health-care, energy and regulation proposals would lead to “$6,500 less in median household income by 2030.” [Emphasis added.]

But there were many more devastating details that drilled a hole in those pushing “Bidenomics,” like Krugman. Specifically, according to the study cited in the editorial, Biden’s plans (if fully implemented) “would reduce full-time equivalent employment per person by about 3%,” and cut “the capital stock per person by some 15%.” Even more jaw-dropping was that the plans would reduce “real GDP per capita by more than” a whopping “8 percent.” [Emphasis added.]

The Editorial Board put these numbers into a chilling perspective:

Compared to Congressional Budget Office estimates for these variables in 2030, this means there would be 4.9 million fewer working Americans, $2.6 trillion less in GDP, and $6,500 less in median household income, [emphasis added].

Biden’s plan would also “raise labor costs by imposing the 12.4% Social Security payroll tax to income above $400,000.” According to The Journal, “The $400,000 threshold isn’t indexed for inflation so it would apply to ever-more Americans as the years go by.” [Emphasis added.]

The Journal even took aim at financial institutions like Moody’s Analytics, which have tried to bolster Biden’s economic agenda. The Journal’s Editorial Board stated that these institutions have an explicit Keynesian bias when making their estimates. The Journal wrote:

“[E]veryone knows most economists at today’s big financial institutions have a Keynesian bias that posits consumer demand and government spending as the main drivers of growth. That’s certainly true at Moody’s, whose chief economist is Mark Zandi, who in our view underestimates the impact of higher tax rates and regulation in his economic calculations. This isn’t a personal criticism, but a factual statement about his economic model.”

Zandi also happened to be a Hillary Clinton donor and “registered Democrat.”

The Journal summarized that the problem with Biden’s policies “is that they will have a long-term corrosive impact by raising the cost of capital, reducing the incentive to work and invest, and reducing productivity across the economy.” The Journal continued: “Americans will pay the price in a lower standard of living than they otherwise would—and that they deserve.”

Recently, ABC News chief Washington correspondent Jonathan Karl fact-checked Biden’s core claim that “[n]obody making under $400,000 bucks would have their taxes raised” under his tax plan. But, according to Karl’s reporting, this wasn’t true.