You Knew It was Coming: MSNBC Host Floats Canceling the McCloskeys at GOP Convention Guest-hosting MSNB’s AM Joy today, Jonathan Capehart of the Washington Post and MSNBC suggested that network execs shouldn’t show the “felonious couple,” i.e. the McCloskeys, when they speak at the RNC convention next week.  And guest on the show claimed that President Trump would use the McCloskeys as an example to promote a “violent mutiny” should he lose the election.

The McCloskeys made national news when they defended their home by displaying weapons when a large BLM group entered their gated community. The McCloskeys have been convicted of nothing, and the Missouri Attorney General has intervened, calling their indictment by the Democrat St. Louis Circuit Attorney a “politically motivated prosecution.” And the governor of Missouri has stated that he would pardon the couple, if convicted, saying “they’re being attacked frankly by a political process that’s really unfortunate.”

While suggesting the canceling of the McCloskey couple—who benefit from the presumption of innocence—Capehart predictably didn’t utter a peep about the Democrats having given a convention speaking slot to someone convicted of murder in a particularly gruesome and grisly slaying. 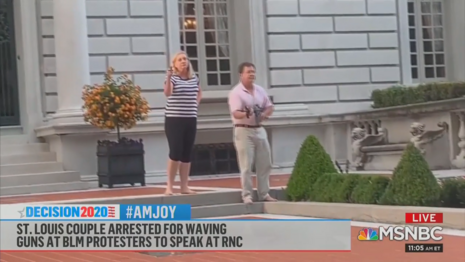 Commenting on the RNC’s invitation to the McCloskeys, activist Brittany Packnett Cunningham claimed that President Trump “wants to give permission to the people who intend to harm us.”

Cunningham also asserted that President Trump is using the McCloskeys as an example for others to “emulate,” and is “readying his people for violent mutiny” if he loses the election.

This is an entirely predictable tactic by the liberal media. Last week, CNN and MSNBC turned into DNC TV during the Democratic convention. On Tuesday, for example, MSNBC carried 119 out of 120 minutes. But now an MSNBC host is arguing for censorship at the GOP convention.

Capehart’s suggestion that the McCloskeys be cancelled, and Cunningham’s warning about President Trump fostering a “violent mutiny,” was sponsored in part by Proctor & Gamble, makers of Gain.

JONATHAN CAPEHART: Brittany, what does it say — that the Republican National Convention is going to feature a felonious couple that was waving guns at peaceful protesters in front of their home? And then, you know, network executives are going to have to decide whether they’re actually going to show them, but what does it say that they’re even being given a platform?

BRITTANY PACKNETT CUNNINGHAM: It says that Donald Trump wants to give permission to the people who intend to harm us . . . And the people who are doing that are now going to be held up as a paragon of American values. They are going to be held up as the very people that everyone watching the RNC who plans to vote for Donald Trump should be ready to emulate.

And let’s connect the dots here. They’re not just going to be ready to emulate them between now and November. I am very, very worried about the fact that given all of the invalidating rhetoric that Donald Trump has used about this election, attempting to undermine results before we even get them, that he is readying his people for violent mutity if the results don’t go his way.