The Nation of Islam, led by notorious anti-Semite Louis Farrakhan, has lost its YouTube channel for violating the platform’s policy on hate speech. 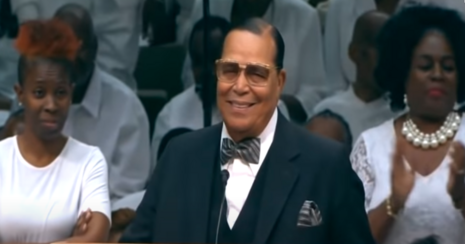 After announcing in 2019 that YouTube would remove videos and channels promoting white supremacy and other bigoted ideologies, it has finally decided to remove the Nation of Islam from its platform over a year later. On Oct. 2, the group’s YouTube channel was removed for hate speech. In particular, it was removed for its proliferation of conspiracy theories involving members of one of the platform’s protected categories, according to The Jewish Journal.

Other channels with large followings that are run by Nation of Islam members still remain on the platform, according to The Jerusalem Post.

“After updating our guidelines last year to better address content that spreads hateful conspiracy theories, we saw a 5x spike in video removals and have terminated over 25,000 channels for violating our hate speech policies,” YouTube said in a June statement to The Verge. The platform added that it has“strict” rules governing hate speech and will terminate any channels that “repeatedly or egregiously” violate them.

A July 2020 report from the Anti-Defamation League (ADL) called Farrakhan “the most popular antisemite in America,” adding that his messages espousing “hate and division have been given a pass in mainstream society.”

In 2017, Farrakhan called the Jewish people “the enemy of God,” according to the ADL, and has repeatedly referred to members of the Jewish community as “satanic.” In 2018, he compared the Jewish people to termites. “When they talk about Farrakhan, call me a hater, you know how they do – call me an anti-Semite. Stop it, I’m anti-termite!” Farrakhan said.

None of those incidents resulted in a ban from YouTube for Farrakhan.

YouTube began cracking down on white supremacist channels in June 2019 after it updated its rules governing hate to include “videos alleging that a group is superior in order to justify discrimination, segregation or exclusion” based on protected qualities, including religion, according to The Verge.

The video sharing platform is late to the game, waiting until now to restrict Farrakhan’s group that espouses anti-Semitic beliefs targeting the Jewish community. Jewish defenders have questioned for months why Farrakhan’s hateful tropes have seemingly remained untouched on YouTube, and conservatives have decried the left’s unwillingness to denounce his hateful message for years.

Conservatives are under attack. Contact YouTube at (650) 623-4000 and demand that the platform apply their policies equally to all groups. Tech companies need to embrace viewpoint diversity while also applying restrictions in a fair and balanced manner. If you have been censored, contact us at the Media Research Center contact form, and help us hold Big Tech accountable